THE WIZARD IS COMING TO UVTO! 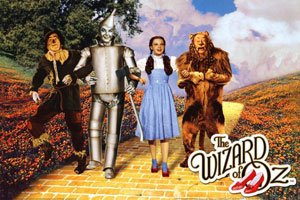 “Oz” all began in 1900 with the publication of The Wonderful Wizard of Oz by Frank L. Baum. The original 14 “Oz” books did well, spawning enough interest for the creation of several stage presentations and more than two dozen film adaptations.

The 1939 MGM movie is what we all remember of The Land of Oz. MGM had many cast changes and even Judy Garland was not meant to be Dorothy, as the first choice was 10-year-old Shirley Temple. While not an immediate success, re-release sales to TV made Oz a fortune. In its 80th year, The Wizard of Oz is ranked as one of the Top 10 movies of all time!

When the film was nearly completed, it was found to be too long. Studio big-wigs’ first idea was to cut the Judy Garland classic…Over the Rainbow!

The Lux Radio Theater broadcast their version of The Wizard of Oz on Christmas Day 1950 with Judy Garland at age 28 as the only original cast member.